Sunday evening we arrived in Bangkok after a 9 hour flight. The 6 of us coming from Sydney were met by a driver and Win our guide. The Melbournians had flown in earlier in the day.  We drove out to Bang Saen Heritage hotel.  It was great to meet up with everyone and realise that the trip was now a reality.  We coached down to a local Thai restaurant for dinner which was amazing and slept well.

Monday …met at 8.30 in the lobby and paperwork was checked before we departed for customs and hopefully the cars. There were a team of locals to assist this process which was invaluable. They made sure we had all that was required and we boarded the coach for the trip to Customs.

All dressed in our team shirts we made a statement as we arrived and paperwork was signed, we waited and waited some more. At about 11.00am Win suggested that it would take a while and it would be best if we went to Pataya Beach where there was a large mall and of course the beach opposite. This was fine and we window shopped, walked the beach and had lunch. Boarding the bus at 1.30…we drove slowly as Win was still waiting to hear if the cars were ready. Not to be. We stopped at another mall,  waited in a Starbucks (and did some more browsing ) for another hour…then two until at 4.30 we were informed we could go to the cars.

As we arrived a cheer went up in the bus. It was great to see them.  Vulcan looked great. All cars but one started, with no fuel being the diagnosis on Tony’s.  The cars had been loaded with near empty fuel tanks due to shipping  regulations and a cracked fuel filter had not helped. One of the Thais helping us headed out for fuel. Meanwhile still some final paperwork but soon all cars were cleared and ready to depart.  We lined them up for team photos and then drove in convoy back to hotel. The first stop was for fuel ! We arrived back at the hotel after the sun had set.

In one street as the traffic was at a standstill a small boy was watching the cars. He appeared to be counting the cars and Henk in the car ahead, held up 8 fingers. The boy quickly relayed this back to his mother in the shop and then proceeded to count the cars himself. 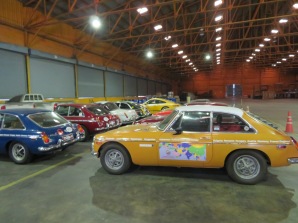 This added a smile to our faces too after a very long and weary day.