We headed off on a walking tour at 9am before the heat of the day. The old town had a lovely feeling about it and for the first time on the Silk Road one can imagine travellers stopping here in bygone days to rest their animals and exchange /purchase goods.

The old Madrassah  was used for crafts but had a lovely style. 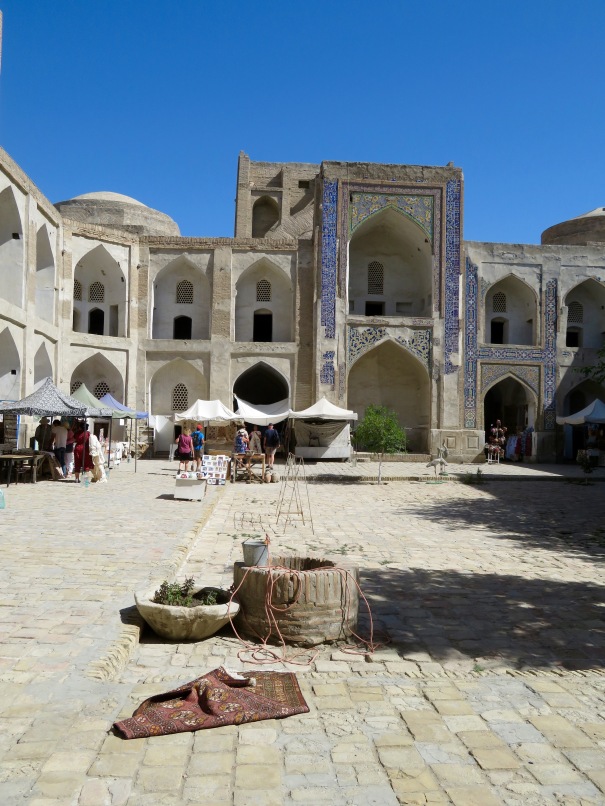 The Kalon mosque, Miri Arab Madrassah and old minaret make for a beautiful setting. This Madrassah is one of the few still in use and has room for classes as well as accommodation for about 120 students. We were not able to go past the main door as it for closed for the school holidays. The Mosque , however we did enter and it was large and had an inspiring feel about it. Not very often walking through a building you can experience a feeling of awe. This mosque did it for me!

Continuing walking we visited the Arc which was the Amir’s palace. This is no longer a residence but has been renovated to display artefacts in the museum and the throne room/coronation room was interesting with covered edges but the main building open to the sky.
When having an audience with the Amir one was to approach with hand on chest and when leaving you were not to turn your back on the Amir so you and to back all the way to the door.
What remains of the original Arc is only about 20% of the total buildings that would have existed in the day. The wall surrounding it has been rebuilt. 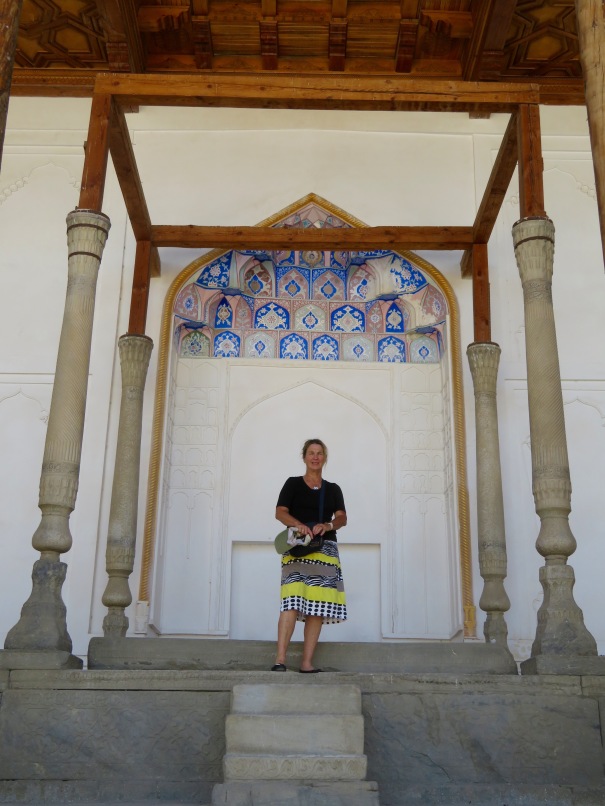 We passed by some of the craftsmen (masters) in different crafts such as steel forging (for knives) and engraving plates. Also the spices that are found in everyday food was an interesting stall. Amazingly saffron, a spice that you associate with the silk road was not cheaper here than in Sydney!

We visited another mosque set behind one of the ponds in Bukhara. The leader of the Mosque allowed us in.

An old mausoleum built with brick designs completed our tour. It was beautifully constructed and it was pointed out to us that its buildng of the done was based on combinations of 4 (4,8,16,32,64)

Ian and I walked back towards the hotel. It was very hot and we had lunch by the water pictured in yesterdays blog. We then drove Vulcan so that we could photograph her in from the the Madrassah and Mosque and Minaret. 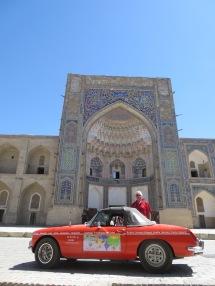 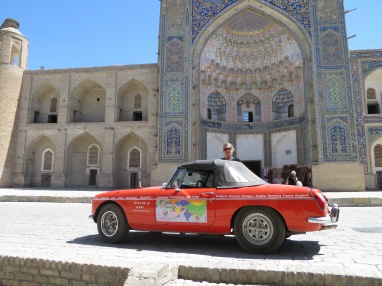 An exciting evening was had as dinner was organised at a local home. A beautiful meal.

After the meal Ian and I bought a gorgeous carpet that we had seen earlier in the day. At 11pm the seller who also designed the carpet had the carpet certificate people come to our hotel to write a certificate for it. It is silk on silk and is just another thing good old “Vulcan” is carrying for us!

Search
Other Links
Group Website http://mgsilkroad.mgcc.com.au/ Clare "Dash B" Blog https://www.theclares.net.au/ Message I will work out how to make these active links but in the meantime please copy and past into your browser
Recent Posts
%d bloggers like this: