Leaving the hotel at 6am we headed off (day 5) for the floating market about 3 hours away. When we were close . at 8.45. Win (our guide) asked us if we would like to see the “dangerous market”  Mental visions would come to mind on why the word “dangerous” but this was soon explained. The market was set up on a narrow train track and 4 times a day the train would come through. Each time the market sellers…of fruit and veggies as well as seafood and meat would roll their awnings back and products off the train  and as soon as the train came through quickly all would be back to normal.  The next train was due at 9.00 am so we had time to walk the track to the station and watch the flurry of activity. Was fascinating and well worth seeing. 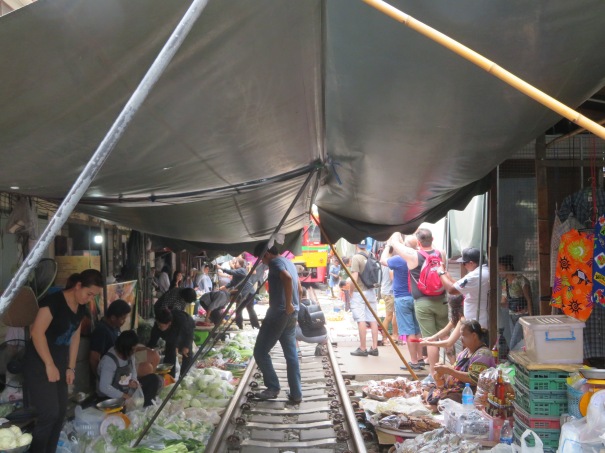 All safe from the train we continued in the bus to the floating market. By small narrow boat we followed the canals to the centre of what was called the floating market. Kilometres of canals…lead to a market on the edge of canal with some sellers and buyers being both on land and in the boats. Interesting but more touristy than I expected.

However having just walked the train track the images of this were still very strong and took away from the impact of the market.

Lunch was at a Rose garden centred on a lake…a popular place for Thai weddings..then  home to make final preparations for our departure from Bangkok in the mgs since bringing them back from the containers.