This morning Ian rose early and with Mike’s help at 5.30am they moved our two way radio aerial from the rear of the car to the bonnet. Up until now we have had very poor communication with the other 7 cars…receiving only some messages from other cars and  Vulcan’s messages being only heard some of the time. Hopefully this will correct our problem but only when we get on the road tomorrow can we really tell. With this problem we have been unable to lead the group of cars or be the end car “tail end charlie” for the day. Time will tell.

After breakfast we caught Tuk Tuks to see some of the sights of Vientiane. 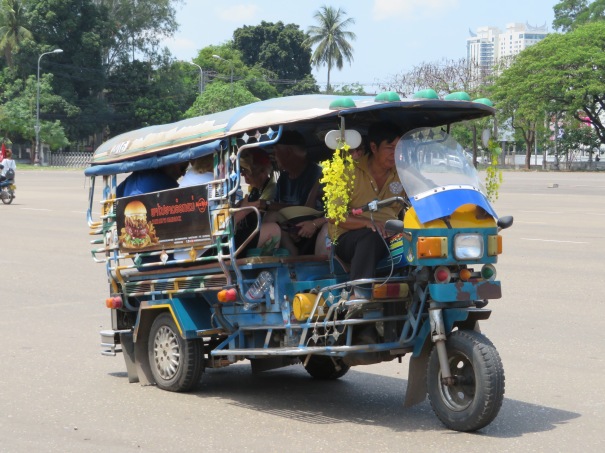 The presidential palace as grand as it was is apparently only used for official functions. We weren’t invited in for tea!

Ho Phakeo Museum which originally housed the emerald buddha…now in Thailand was reconstructed in 1936 and although beautiful is not a residence for monks. it is now a museum. 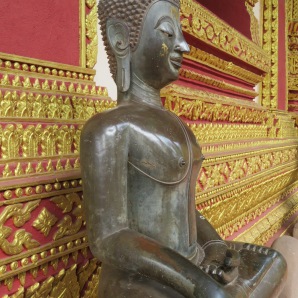 Wat Sisaket was interesting. It is the only ancient temple to remain intact after the destruction of the city by the Siamese in 1828. The corridors inside the courtyard contain many niches with buddhist sculptures.

As we entered the grounds there was a man selling small birds in cane cages. I bought two….after making wishes and releasing them you receive good karma. The birds didn’t take any time to escape! 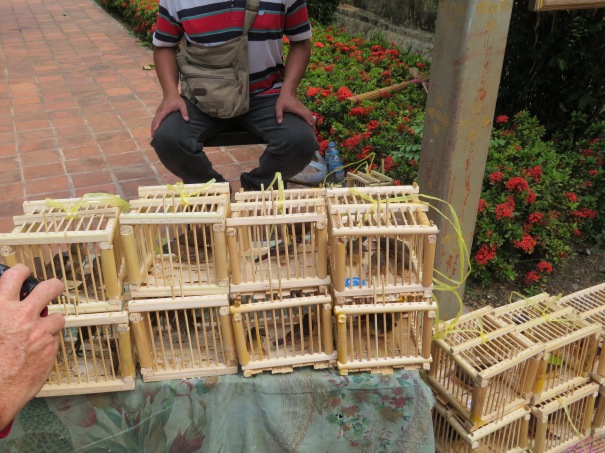 We visited Patuxai memorial monument. it was built in 1957 and resembles the Arc de Triomphe in paris. We climbed the 7 flights to get a spectacular view from the top.

Lastly we visited the Pho That Luang…the Great Sacred Stupa. It is an important Lao monument and symbolised the coming together of all Lao people. It is being restored and will eventually be a museum when completed. 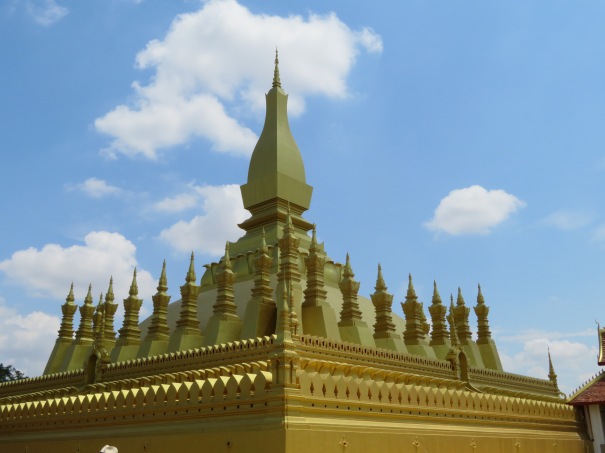 As well as the monuments…it is the sights and sounds of a city that leave a lasting memory. Motor bikes with balloons to sell, the ice-cream man and his motor bike and the water that we were doused with on our way back to the hotel… 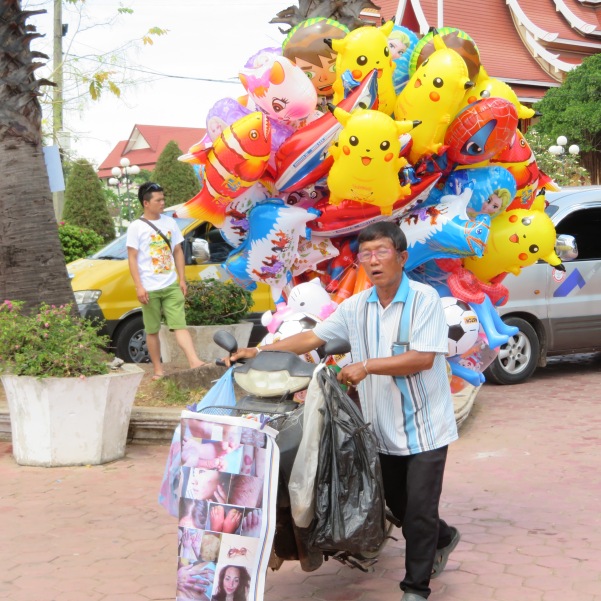 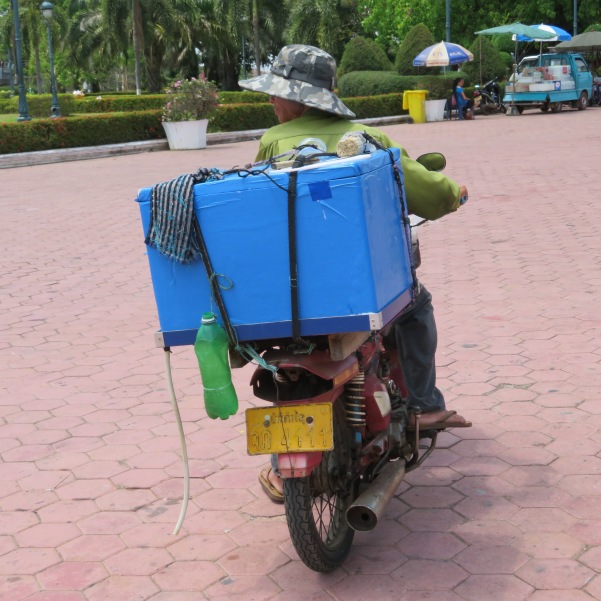 After cooling off in the hotel Ian and I headed off to explore more of the city. Aware of the “water festival” and the quantity of water being thrown we crossed from side to side avoiding a close encounter with a hose or bucket. Ian had a plastic bag to cover his camera with. We found a lebanese restaurant and  3 of our group eating lunch there …a perfect location to watch the water activities on the main street and eat wonderful falafels. 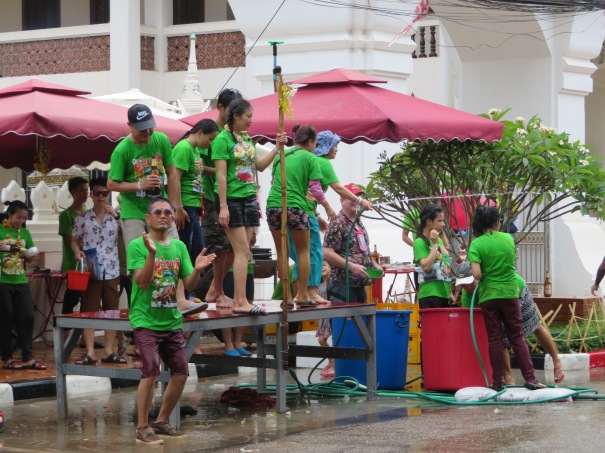 As we walked through several temples after lunch we saw not only golden buddhas but a lotus pond and many people splashing the statues with water for blessings. We even watched a family of 3 generations release some birds after praying and making their wishes. What an interesting way to celebrate the Laos Buddhist New Year…by splashing each other, buddhas, receiving and giving blessings in the water festival. 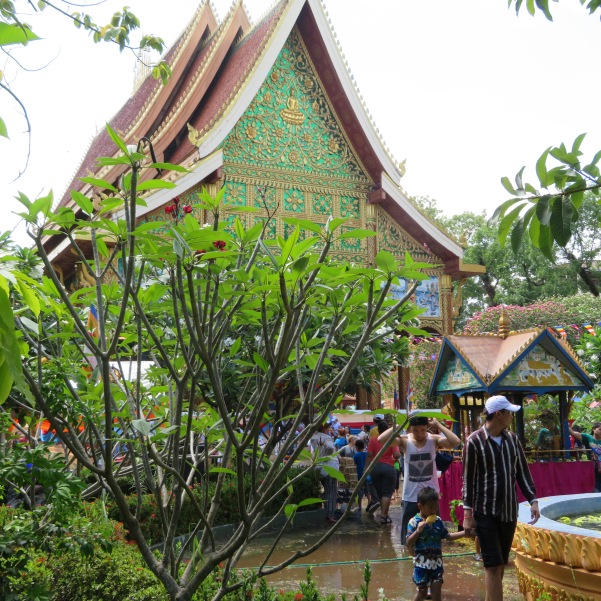 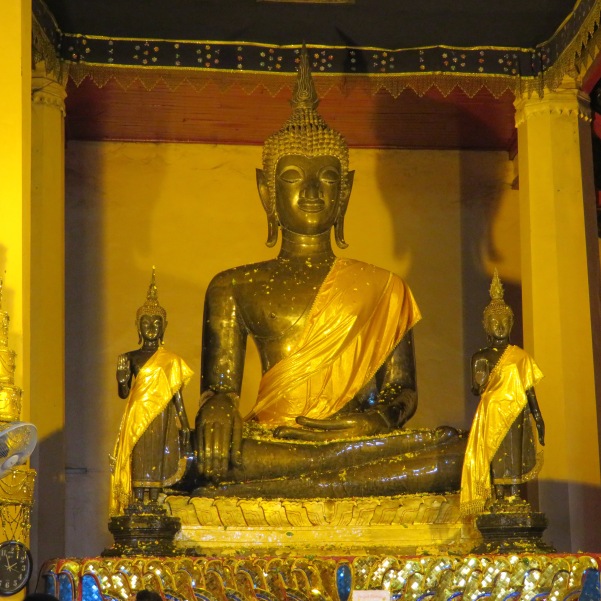