Today was a driving day so leaving at 8am we had about 340 kms to cover. The villages we passed through were still celebrating New Year so the car windows were closed as we approached water throwers. Although it would have been cooling in the heat, it would also have left us drenched for the rest of the day.

Lunch was a gorgeous spot by a river with a small causeway as an alternative to a bridge where bikes could wash their tires as they rode across.

As usual the animals on the road continued…geese, cows, chickens, goats, water buffalos etc. We began the journey on the flat and then through the valley…slowly climbing to just under 2000 metres. 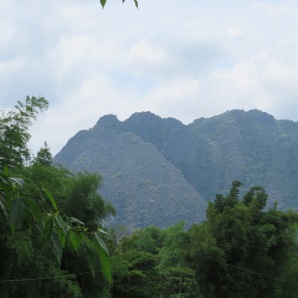 The views were spectacular but it made it all the more so by the fact that we hadn’t seen any hills for 2 weeks. Although this wasn’t too high it did put the cars to the test to see how hot they became on the climb. Vulcan performed well.

Arrived at Luang  Prabang late afternoon and our usual evening group meeting was conducted with drink in hand in the pool.

Pleased to report that our two way radio, having had the aerial moved seems to be receiving and transmitting well. The only other glitch for Vulcan is she doesn’t wasn’t us to unlock the passenger door with a key. For the moment it is locking and unlocking the passenger side from inside after gaining entrance from the drivers side. These temperamental old girls!