The day started with a morning at the Elephant sanctuary. After our experience in Malaysia with the sanctuary there we were not sure what to expect. It was slow to start as others were riding the elephants. They have 13 elephants there who had been rescued from logging. 2 of these were babies 4 and 5 year olds. The others were all female and ranged between 36 and 44 years. They were not chained in the daytime nor were hooks or prods used on them. Their carers had been with them for a number of years.

We climbed on the elephants back with the carer initially sitting behind. Our feet were  behind the elephants ears and basically we held onto the top of their heads. (very bristly)  My elephant Mai Mai was 44 and was gorgeous. We climbed down the hill which was harder than I thought. Maybe it was the distance I could fall! We crossed the river which seemed easier going and walked across the island to cross another stretch of water. We disembarked either by  the stand or the elephant being given the command to crouch down. Mai Mai received bananas as a reward.

As there were only 11 elephants and there were 16 in our group, Ian then had his turn. This was great because I was able to take photos of this. 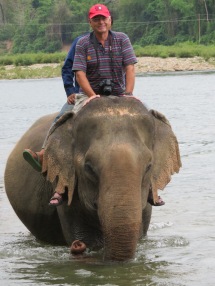 When all the group were gathered again we were taken across the river to the baby elephants. I bought two hands of bananas and had a wonderful time feeding the baby elephants these. They were very playful and it didn’t matter where the banana were they would find them. 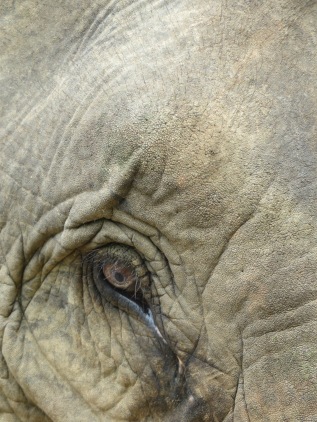 The afternoon gave us a chance for a tour of Luang Prabang. The Royal palace that is now a museum, 2 temples (Wats) and a climb up Mt Phusi. The temples were amazing with their buddhas in all shapes and sizesand Johnnie our guide continued to give us valuable information on Buddhism and the local environment.

Both the Museum and the Kings Wat had glass mosaics on the wall…an example of which is above seeing elephants is todays theme! Spectacular as these mosaics cover many walls in both the palace and the temple with stories depicting daily life. 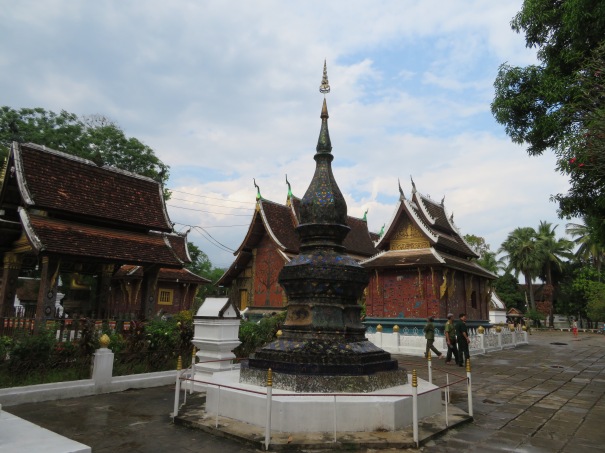 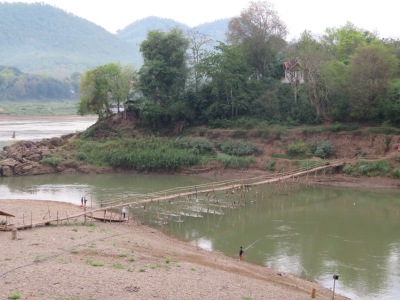 A wonderful day topped off with dinner in a local restaurant on the banks of the river. Pad Lao in a beautiful setting…what more can one want.