Home › Vulcan on Tour › Ashgabat to Iranian border and Mashhad

Ashgabat to Iranian border and Mashhad 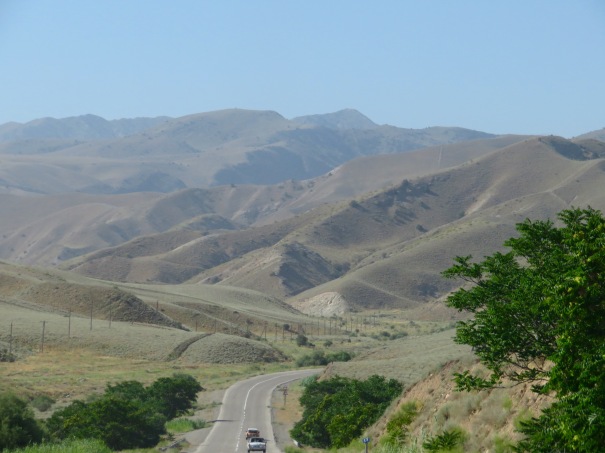 We drove to Mashhad after crossing out of Turkmenistan into Iran and then we  drove to the hotel. We checked into the hotel and caught taxis back to the mausoleum of Fergosi a renown Iranian poet.

We stayed in Mashhad for 2 nights. The first night the group went to a lovely Iranian restaurant for dinner. We dined after sunset as the restaurant only opened when the Ramadan fasting ended.

On the second day in Mashhad, Ian slept for the morning as he was unwell and I went to Mosque shrine. The shrine was the largest in Iran. It was very interesting as the women had to be fully covered and although we had headscarfs on and long sleeves and skirts or pants, we had to wrap a piece of fabric around us as the local women do. We were also unable to take our cameras, makeup etc into the shrine and our bags were checked for all of this. The shrine was very moving and the architecture and tiling beautiful.

The afternoon was spent at the hotel, we met with Hasham as Ian was leading the group for the following day.